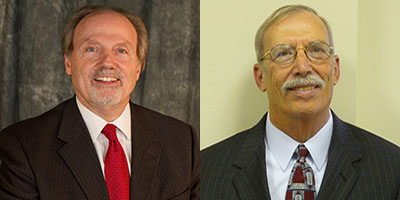 Two SPPA alums have received induction into the AICP College of Fellows, the American Institute of Certified Planners’ highest honor given to a member. Richard Gertson and James G. LaRue were inducted on May 1st at an awards ceremony during the American Planning Association (APA) conference in San Diego.

Richard Gertson (pictured on the left) received his MA in Urban Planning at the University of Iowa and his JD the previous year. He says he has “great memories of being one of David Forkenbrock’s graduate assistants.” Gertson is currently assistant director of planning and development services with the City of Arlington, TX. Previous to that, he was the director of planning and development services for the City of Mesquite, TX, for 14 years. His career has also included positions with cities in Texas and Oklahoma as city manager, city attorney and urban planner. Gertson provided mentorship to two UI planning students who were pursuing combined degrees with law through summer internships during his time with the City of Mesquite, TX.

Gertson was nominated for FAICP by the APA Texas Chapter.
“In a diverse career as a planner, lawyer and public manager, Richard Gertson has taught elected officials, the public and aspiring planners the value of planning to transform communities. Cities and towns across Oklahoma and Texas know Gertson for his grit and determination to confront challenges and bring about lasting change. From downtown and comprehensive plans, revitalization codes and affordable housing to plans to protect sensitive extraterritorial jurisdiction, he demonstrates how planning can achieve what many believe to be impossible, and set a community and its residents on a path to a brighter future.”

Jim LaRue (pictured on the right) graduated with an MS in Urban Planning in 1974. Of his time in the program, Jim says,  “I will always be indebted to Professor Don Mazziotti who inspired me to be a planner with his Planning Legislation course.” Jim’s career has included positions ranging from city planning and zoning director to county administrator. He is currently President of LaRue Planning and Management Services in Fort Myers, FL, and has held the position for nearly 30 years. During this time, he’s worked with numerous Florida cities, counties and special assessment districts.

According to the APA Florida Chapter,
“Jim LaRue’s humanitarian passion focused first on neglected communities and grew into educating citizens for community engagement and public leaders for clearer understanding of community planning. His award-winning vision studies and local plans sought equity through revitalizing economically disadvantaged areas into sustainable communities. He's influenced over 1,000 public employees, and his creation of a citizen training academy taught over 5,000 people how to engage in the civic process. He's transformed development patterns through collaborative efforts, forged fairness and diversity, and educated entire communities, all of which will clearly have a profound effect on future generations throughout Florida.”

The FAICP honor is given for outstanding contributions as a professional planner and recipients are nominated and selected by their peers. Their work has been significant and transformative in the field, as have its effects on the communities they serve. Those with this distinction have achieved excellence in the profession, teaching, mentoring, research and community leadership and service. Gertson and LaRue join several other UI urban planning alums who have received this honor: Bob Becker, Dean Palos, and Jim Schwab. Professor Jerry Anthony was inducted as a FAICP in 2020.